One of the major goals of the Ministry of Public Telecommunications is to better equip UG, so as to provide broad band internet access to students and lecturers, Minister Hughes said. 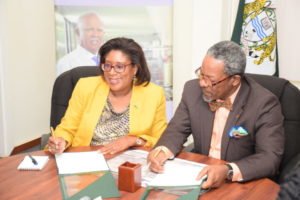 The Minister noted that it is an exciting time for her, the e-government unit and the Ministry of Public Telecommunications. The E- Government unit has been able to create a wireless fibre optic ring, to connect the university onto the e-government fibre optic network.
Minister Hughes explained that another focus of the Ministry will be to ensure that as many locations within the university have internet access at a level that facilitates productivity and expansion.

Another project is facilitating the inter connection of Tain, John and Turkeyen Campuses. Minister Hughes hopes that in the next two weeks, “we will gather and show you a real demonstration because our unit, and Ministry, will be handing over to UG, a video conferencing facility.” The facility will allow all three campuses to interact in live real-time.

“We want to make sure that we are investing as much as possible and dealing with some of the challenges that we know the university faces,” the Minister stated.

The Ministry of Public Telecommunications today also handed over 20 laptop computers to the UG Vice Chancellor. Minister Hughes said this is to ensure that lecturers are better equipped.

Professor Griffith expressed gratitude for all the teams involved in the process of getting the MoU done, noting “it is a symbolic but substantive demonstration of what we intend to do better over time.”

Professor Griffith said that the MOU represents, “the end of a torturous long -standing frustration by a lot of existing students.” He explained that he has been at UG for over eight months, and during that period both students and lecturers have raised their frustration, about the limitations about some things that are normal at universities.

This also enables the university to be able to expand platforms for the delivery of programmes.

The university plans to establish a school of entrepreneurship and business innovation soon. “We have got to look beyond the coast, to deliver those services,” Professor Griffith noted. This symbolises opportunity for expansion and offerings, Professor Griffith said, ‘to build the revenue base for this much needed enterprise called education delivery at the university.”